Your registered email address must be the same as the one you sign in with.

From a totally non-horsey background, my life has been defined, ruled, shaped and ultimately fulfilled by my horses. Below are just some of those who have had the biggest impact on my life.

Loyal, patient and incredibly consistent, he began my love affair with SJ and took me right through Juniors including HOYS and Royal International.

He had forgotten more about jumping than I could ever learn and was the best companion a girl could wish for!

My first horse. 17.1 TB. 4 years old and bought off the racetrack for my 16th birthday.

Complicated, neurotic but ultimately hugely talented and rewarding. Bit of a baptism of fire but he taught me the true meaning of patience and allowed me to take on the big boys at places like Hickstead and Royal Windsor and, on our day, even beat them.

14 hands dark bay pony mare. She was 4 years old and I was 17 when she was given to me as an un-rideable rogue.

Beautiful, self possessed and freakishly talented. Competed as a "horse" all her life becoming Grade A in SJ and allowing me to explore my fascination with XC for the first time. She won 43 Open Hunter Trials and was never out of the top 6 in ODEs.

Even more importantly she totally hooked my husband on the competitive lifestyle! She graced our lives for 28 years. 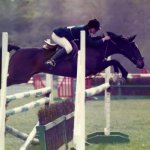 What a gift! Tough, feisty and beyond price to me. She introduced me and my family to eventing proper and made it our life. Invincible against the clock in show jumping as well, she made the 'impossible' easy. She took me on a journey from my first novice event to what should have been Badminton in 1987 if they hadn't cancelled it!

Her loss in 1988 remains the lowest point of my life. 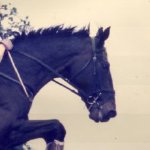 Also black, 16 hands and given to me as a 2 week backed 4 year old Came to me 5 months after I lost Soda and had so many similarities it was spooky. Exquisitely beautiful, more than a little deranged and born believing there was nothing on this planet she could not jump.

Allowed us to continue our love affair with eventing even though her insistence on her own agenda in the dressage meant she was never the world beater she could have been.

She left us at 30 years old, still calling the shots! 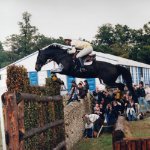 Gorgeous to look at, he had the heart of a lion and the soul of a comedian! Found 4 star easy but unfortunately his physique never quite stood up to allowing him to make that jump to 5 star. Reluctantly retired from competition at 14 after 2 injuries.

I said when he arrived that he would probably be my last serious event horse - and that ended up being true - but he was a great one.

Oh yes - and he could catch carrots! Honest. 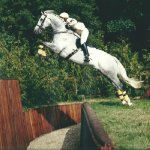 Black Irish gelding. 16 hands. Bought for very little money at 6 years old to school for selling on as a dressage horse. Never did get sold - I was having too much fun!

Handsome, incredibly intelligent with personality plus. He took me on a journey like no other - from our first prelim together to Grand Prix (taking in 2 National Combined Training Titles on the way).

He allowed me to learn about passage, piaffe, tempi changes and all that fancy stuff.

A well known German trainer told me he was a once in a lifetime horse for any rider - and no-one who knew him would disagree including Carl Hester who helped me train and also became a friend.

Swell died a few years ago now, aged 22, and that was the 2nd lowest point of my life. 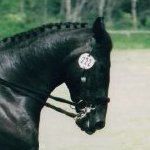 The latest in a long line of horses given to me because of behavioural issues. Super athletic and talented in his flatwork and loves playing at liberty. He has become a true friend who will turn his hoof to anything. 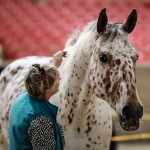 My daughter is a photographer/artist and Yoga teacher who also loves her eventing.

I know that I have been blessed with more than one "once in a lifetime" horse. They have enriched the life of our whole family and I can never repay them. There are of course literally hundreds more who have contributed much to our lives. They are too numerous to mention but I have forgotten none of them.